This is actually a book that my friend and I had started. (Before some stuff went down between us. She somewhat apologized since then, but we have yet to actually talk.) Anyways, I figured since I had already written a few different "Chapters" I would just go ahead, and put them up here. Let me know what you think. I may put up what we had put together, and the back story to it at a later date.

-Reed Castle
Human, Shaggy brown hair, Born January 2,1994, 26 years old, dark green eyes, graduated from the University of Texas at Austin, he was offered a job worth a bit more then a new doctor usually gets but turned it down when he found an ad online for doctors who are more interested in "helping those who are less likely to be helped",so he's now a doctor intern at the S.M.R. under Dr. Sizemore.


-Emberlyn Ray
Vampire, born July 23,1998, Named Emberlyn Fayth Ray, Nickname is Em or E.R, jet black wavy hair, hazel eyes, 22 years old, only one in her family turned into a vampire when the epidemic hit because she stepped in front to protect her younger sister, ran off to keep her family safe from herself, sister is Amberly, Emberlyn stumbled upon the Sacred Mortal Recovery (S.M.R) and checked herself in no longer wanting to be a vampire and wanting her family back.

-Amberly Ray
Human, Born June 3rd, 2002, Named Amberly Grace Ray, Reddish auburn hair with blonde streaks, 18 years old, green eyes, human attacked by a vampire but her sister Emberlyn got in the way of the attack and got bit, she wants to find her sister who took off after the attack.

-Zeke Thornes
Vampire, Born October 30,1996, Named Zeke Isaac Thornes, Spiky bluish black hair, 24 years old, piercing blue eyes, turned into a vampire on his own free will when a group of his friends and him thought it would be cool to hunt down the vampires hangout and change, turns out he was wrong, he can't be around his family because they want nothing to do with him.

Email ThisBlogThis!Share to TwitterShare to FacebookShare to Pinterest
Labels: book 2

"The role of a writer is not to say what we can say, but what we are unable to say-Anais Nin"

Ashley @ Bookaholics Anonymous
Epilogue
I don't bite. I don't shift. I don't cast. I can't fly. I don't have fins. I just read. That is just me.

Want me to review something check first--> Review Policy

My book Summary ...Sort of. 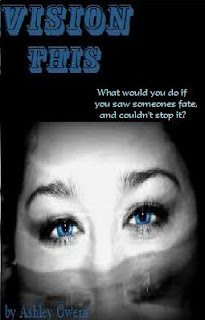 Knowing a persons fate is easy, it’s forgetting that fate that’s truly hard. If I knew that it would turn out to be the “happily ever after” ending it wouldn’t be as bad, but knowing they never stand a chance well it pretty much sucks. Still, I want to save them, I believe I can save them, I have to save them. I can’t really explain why I see what I see. I can’t turn it on and off, and soon I’ll learn that I REALLY can’t save them. It sucks.